Scissors - can you cut it?

The art of scissors - can you cut it?

It's a really odd question this - how old were you when you learnt how to use scissors?

I haven't a clue. According to my memory I was obviously born with this basic ability, with no need to learn how to do it. Of course this is utter rubbish, I must at some point in my childhood years been taught ( I would suspect by my mum) to use them.

Why on earth am I asking such an odd question you are of course asking yourself.
Because, I have noticed that its not something that children naturally learn or do.

Most arts and crafts involve using scissors. Whether its just to cut tape to stick something or to cut a template out, the reason to need to use them is endless.

In recent months I've watched my art club children, whose ages range from five to 11, either struggle or use them with no effort or thought.

This made me wonder why there's such a gap.

I have a five and three quarter year old, who to be honest if asked to cut something out just does it. If she needs to get some tape she will cut it off the roll. I've done sewing with her and she's cut the pattern pieces out without a second thought.
When did I teach her to do this?
I honestly have no idea.
I must of at some point though mustn't I ?

I appreciate that my obvious need to use scissors in this blog is related to arts and crafts, but to be honest using scissors has to be a basic skill surely?

I have quite a few 8 year old boys who to be really blunt about this, haven't a clue what to do with a pair of scissors and the look of horror that appears over their little faces when I say "now lets cut this out", is really quite shocking. So their parents haven't taken it upon themselves to teach them this but why haven't the school noticed and dealt with it?

Then I wondered about other basic skills. Simple things like, making a cup of tea. Making a sandwich. If I put this to my scissor phobic 8 year olds what would they say?

So many simple skills involved to do everyday ordinary things.
Measuring - pouring - stirring - balancing - using a knife - cutting, there are probably more to go on the list!

So my question is, are these basic skills no longer being taught? Maybe because they aren't needed to operate an iPhone? OR do children just not take an interest in things they don't see as necessary in their world?

Technology is the most amazing and wonderful thing - I wouldn't be so obsessed with Pinterest if it wasn't for it, but please don't forget to teach the good old fashioned basics.

I should point out that my scissor phobic 8 year old boys - are now rather nifty with a pair of scissors, something I'm rather proud of. 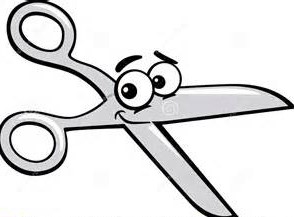